A few days ago, #BlackintheIvory started trending on Twitter, documenting Black experience in academia. The stories were unsurprising and are an important front in the recent surge in #BlackLivesMatter activity. A little under sixty years previous, in the Jim Crow South, Vivian Malone famously suffered an attempt to obstruct her enrolment at the University of Alabama. Across the Mississippi, another V. Malone had faced the barriers of segregated education. 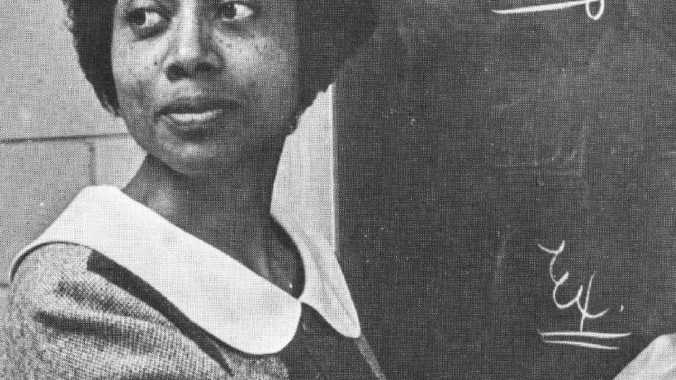 In August of 1961, in her home town of Waco, Texas, Vivienne Malone-Mayes applied to pursue a Ph.D. in Mathematics at Baylor College, Texas. She already held B.A. and M.A. degrees in Maths and was teaching the subject at Paul Quinn College. A few days after she wrote to Baylor’s admissions board, she received the following reply.

Thank you for your letter of August 24. I have discussed it with my superiors in office here but have nothing favorable to report. We have not yet taken down the racial barrier here, although I have been hopeful that it would be done eventually. It seems that everyone is waiting for everyone else and no one will take the initiative in such matters.

I sincerely wish that it were possible for me to process your application for admission to Baylor University as a student.

Alton B. Lee, Registrar and Director of Admissions

(It’s worth noting that Baylor didn’t even offer a Ph.D. Mathematics programme at that time, which Lee does not feel it necessary to point out). It was the University of Texas at Austin that would, in 1966, confer the title Dr. Malone-Mayes. After which, Baylor College had slightly lowered one racial barrier and offered Dr. Malone-Mayes a professorship. Yet, of course, as Claudia Henrion notes, “The obstacles she [Malone-Mayes] confronted were both large and small, and it took tremendous determination to pursue this path in relative isolation as an African American, and as a woman in mathematics, at Baylor”(Henrion, 1997).

Despite her personal strength and the support of her Church, Malone-Mayes’s health problems, in particular, were exacerbated by Baylor’s institutional racism. Her story is a key study in what bell hooks famously described as ‘systems of domination and the inter-relatedness of sex, race, and class oppression’ (1984) – yet one that also reclaims and reframes mathematics from something unattainable and abstract to a powerful pedagogical ally.